This lovely boutique hotel is a 4-star property located in Geneva, within range of the renowned Jet d'eau, which is filled with restaurants and shopping as well as cinemas and fitness centres: for sale

This lovely boutique hotel is a 4-star property located in Geneva, within range of the renowned Jet d'eau, which is filled with restaurants and shopping as well as cinemas and fitness centres 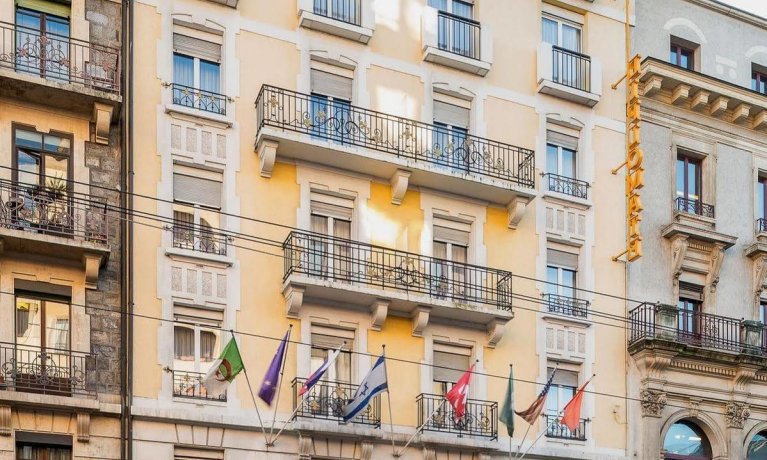 The municipality (ville de Genève) has a population (as of December 2017) of 200,548, and the canton (essentially the city and its inner-ring suburbs) has 495,249 residents. In 2014, the compact agglomération du Grand Genève had 946,000 inhabitants in 212 communities in both Switzerland and France. Within Swiss territory, the commuter area named "Métropole lémanique" contains a population of 1.26 million. This area is essentially spread east from Geneva towards the Riviera area Vevey, Montreux and north-east towards Yverdon-les Bains, in the neighbouring canton of Vaud.

Geneva is a global city, a financial centre, and a worldwide centre for diplomacy due to the presence of numerous international organisations, including the headquarters of many agencies of the United Nations and the Red Cross. Geneva hosts the highest number of international organisations in the world. It is also where the Geneva Conventions were signed, which chiefly concern the treatment of wartime non-combatants and prisioners of war.

There are 46 rooms in total, of which 2 Suites.

Next to the lobby is a restaurant (which is currently only used for the breakfast service); and there are also a bar and a kitchen.

It lies within walking distance to the business and shopping district and is only about twenty minutes' walk to Cornavin train station.

Originally, the building was used for “serviced apartments”, so the lay-out still would allow today, to transform the hotel back to apartment-use. On the other hand, the hotel could well be managed by a Cluster Management concept.

Presently, this hotel works smoothly and caters to all sorts of clients, who appreciate the area: business travelers, congress participants and also regular tourists from all over the world. But it would need a fresh-up and surely a new branding; with other words it needs "fresh blood" and new ideas.