This Guest house is a long established business in Wexford town, Ireland: for sale

This Guest house is a long established business in Wexford town, Ireland

Wexford (Irish: Loch Garman) is the county town of County Wexford, Ireland. Wexford lies on the south side of Wexford Harbour, the estuary of the River Slaney near the southeastern corner of the island of Ireland. The town is linked to Dublin by the M11/N11 National Primary Route; and to Rosslare Europort, Cork and Waterford by the N25. The national rail network connects it to Dublin and Rosslare Europort. It had a population of 20,188 according to the 2016 census.

Map of 17th-century Wexford. Cromwell's men camped to the southwest. 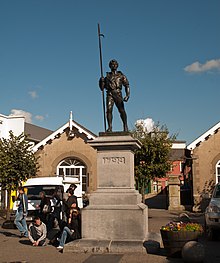 Wexford Pikeman Statue by Oliver Sheppard in memory of the 1798 rebellion.

The town was founded by the Vikings in about 800 AD. They named it Veisafjǫrðr, meaning "inlet of the mud flats", and the name has changed only slightly into its present form. "Veisa" in modern Norwegian means "Way". So 'Veisafjǫrðr' could have meant "inlet of the way" or "Way Fjord". According to a story recorded in the Dindsenchas, the name "Loch Garman" comes from a man named Garman mac Bomma Licce who was chased to the river mouth and drowned as a consequence of stealing the queen's crown from Temair during the feast of Samhain.

For about three hundred years it was a Viking town, a city state, largely independent and owing only token dues to the Irish kings of Leinster. However, in May 1169 Wexford was besieged by Dermot MacMurrough, King of Leinster and his Norman ally, Robert Fitz-Stephen. The Norse inhabitants resisted fiercely, until the Bishop of Ferns persuaded them to accept a settlement with Dermot.

Wexford was an Old English settlement in the Middle Ages. An old dialect of English, known as Yola, was spoken uniquely in Wexford up until the 19th century. The Yola name for Wexford was Weiseforthe.

Following the Crusades, the Knights Templar had a presence in Wexford. Up to the present, their name is perpetuated in the old Knights' Templars' chapel yard of St. John's Cemetery, on Wexford's Upper St. John's Street.

County Wexford produced strong support for Confederate Ireland during the 1640s. A fleet of Confederate privateers was based in Wexford town, consisting of sailors from Flanders and Spain as well as local men. Their vessels raided English Parliamentarian shipping, giving some of the proceeds to the Confederate government in Kilkenny. As a result, the town was sacked by the English Parliamentarians during the Cromwellian conquest of Ireland in 1649.

Wexford's success as a seaport declined in the first half of the 20th century because of the constantly changing sands of Wexford Harbour. By 1968 it had become unprofitable to keep dredging a channel from the harbour mouth to the quays in order to accommodate the larger ships of the era, so the port closed. The port had been extremely important to the local economy, with coal being a major import and agricultural machinery and grain being exported. The woodworks which fronted the quays and which were synonymous with Wexford were removed in the 1990s as part of an ambitious plan to claim the quay as an amenity for the town as well as retaining it as a commercially viable waterfront.

In the early 20th century a new port was built about 20 kilometres (12 mi) to the south at Rosslare Harbour, now known as Rosslare Europort. This is a deepwater harbour, unaffected by tides and currents. All major shipping now uses this port and Wexford Port is used only by fishing boats and leisure vessels.

Johnstown Castle.
Agriculture forms a backbone of the rural economy of Wexford. Johnstown Castle is headquarters to Teagasc, the Environmental Protection Agency and Department of Environment. There is also the Irish Agricultural Museum.

In May 2011 an official web portal for Wexford was launched which encompassed local government, Wexford Tourism, and the Wexford Means Business website, aimed at promoting the value proposition of Wexford as a business destination.

From an employment point of view, major employers in and around the town are: Wexford Creamery, Celtic Linen, Wexford Viking Glass, Parker Hannifin IPDE, Waters Technology, Kent Stainless, Equifax and BNY Mellon. Coca-Cola operates a research plant employing up to 160. Eishtec operates a callcenter for British mobile operato EE that employs 250. Pamela Scott, A-wear and other retailers operate in the town.

Curracloe Beach in Wexford was the location in 1997 for the opening scenes of Saving Private Ryan.

The Wexford Wildfowl Reserve is a Ramsar site based on mudflats, (known locally as slobland), just outside Wexford. It is a migratory stop-off point for thousands of ducks, geese, swans and waders. Up to 12,000 (50% of the world's population) of Greenland white-fronted geese spend the winter on the Wexford slobs. There is a visitor centre with exhibitions and an audio-visual show.

Wexford O'Hanrahan railway station opened on 17 August 1874. On 10 April 1966 the station was named after Michael O'Hanrahan, one of the executed leaders of the 1916 Easter Rising. The railway line from Dublin to Rosslare Harbour runs along the quayside on the north-eastern edge of the town. In 2010 the Rosslare Strand-Waterford rail services were suspended, due to budget cuts at Irish Rail.

Wexford is also served by local and national bus networks, primarily Bus Eireann, Wexford Bus and Ardcavan Bus There are also many local taxi and hackney providers. There is also a local bus service Wexford Bus which services many areas of Wexford Town. For further information www.wexfordbus.com also there are two bus companies that service rural Wexford both wexford bus and Local Link.

Rosslare Europort is 19 kilometers south of Wexford. Car ferries run between Fishguard and Pembroke in Wales and Cherbourg and Roscoff in France. The ferry companies operating on these routes are Stena Line and Irish Ferries. Foot passengers can use the SailRail tickets from Wexford O'Hanrahan station via Rosslare Europort and Fishguard Harbour to reach Swansea, Cardiff Central and onwards including London Paddington.

The closest airport to Wexford is Waterford Airport which is approximately one hour away (70 km). Dublin Airport and Cork Airport are both approximately two-and-a-half hours away.

The town also has a shuttle-bus service which has stops at the town's main facilities.

It is a big three storey structure at some 426 sq m that stands in a prominent position on a corner site that has an enclosed gated car park The success of this business derives not only from how it is run, but also its convenient location and secure car park. It is currently laid out with 10 guest bedrooms ( all ensuite) together with 3 family rooms, pleasant sitting and dining rooms and a well equipped kitchen. The entire is in excellent decorative order and has been well cared for over many years, This sale presents a rare opportunity to acquire a large business premises in a tried and trusted excellent location in Wexford town. If you have been looking for a home and income all in the one building, the St George Guest House is an excellent foundation for your future plans.