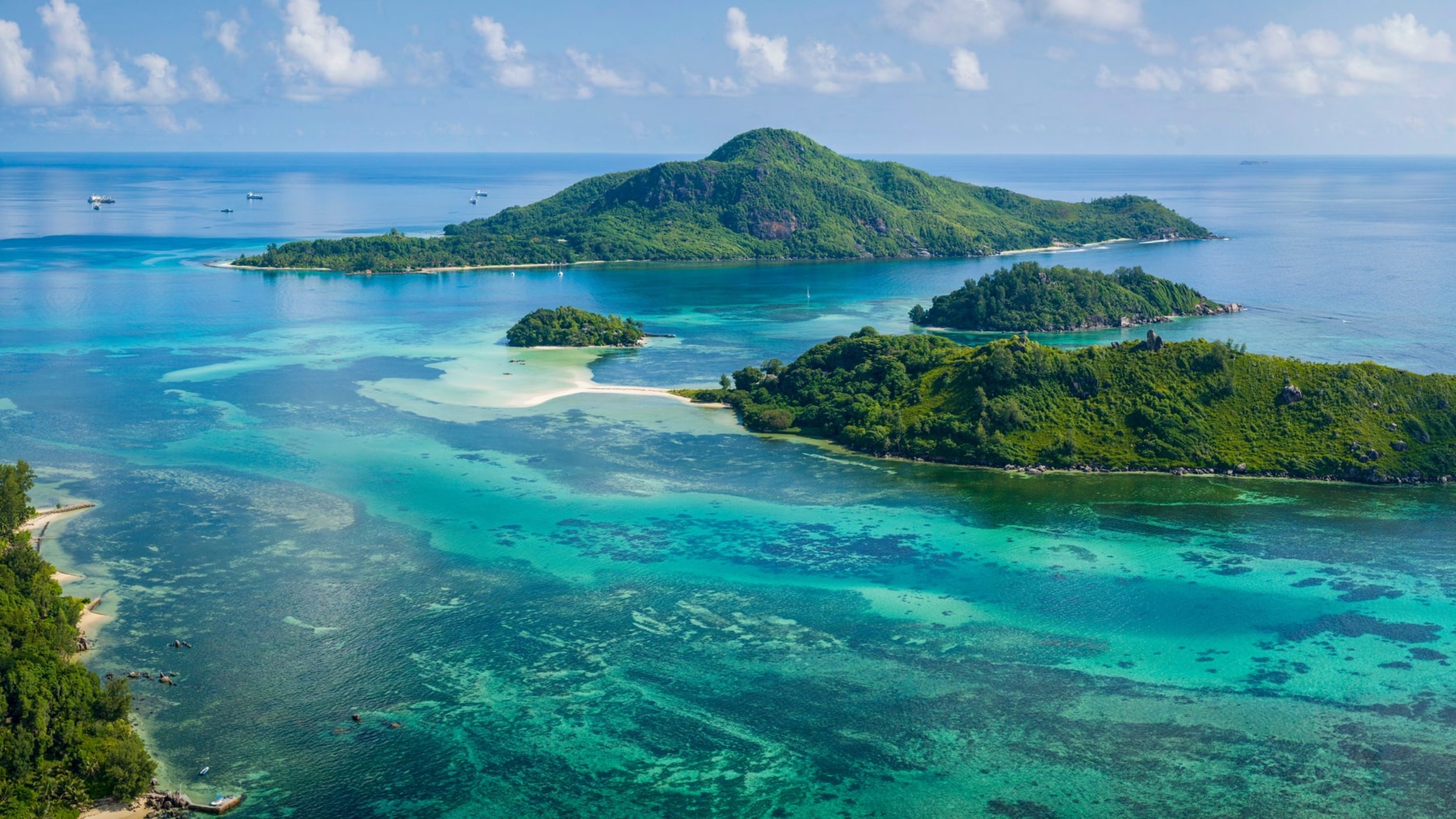 This Inn is a charming bed and breakfast on Ilha Grande in the village of Abraão: for sale 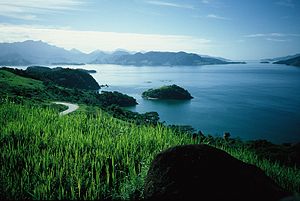 Ilha Grande ("Big Island") is an island located off the coast of Rio de Janeiro state, Brazil. The island, which is part of the municipality of Angra dos Reis, remains largely undeveloped. For almost a century it was closed by the Brazilian government to free movement or settlement because it first housed a leper colony and then a top-security prison. Cândido Mendes high-security prison housed some of the most dangerous prisoners within the Brazilian penal system. It was closed in 1994. The largest village on the island is called Vila do Abraão with approximately 1900 inhabitants.

The island, which is 193 km2 (75 sq mi) in area, is now a popular tourist destination that is noted for its scenic beauty, unspoilt tropical beaches, luxuriant vegetation and rugged landscape. The highest point is the 1,031 m (3,383 ft) Pico da Pedra D'Água. Most of its territory is within the Ilha Grande State Park. The remainder of the island is subject to stringent development restrictions.

On 5 July 2019, Ilha Grande and Paraty were inscribed as a UNESCO World Heritage Site.

The Ilha Grande is one of the most pristine remnants of Brazil's Atlantic rainforest making it one of the richest ecosystems in the world. As a hotspot for biodiversity and conservation, it holds some of the largest remaining populations of many endangered species, including the red-ruffed fruitcrow (Pyroderus scutatus), the brown howler monkey (Alouatta fusca), the maned sloth (Bradypus torquatus) the red-browed amazon parrot (Amazona rhodocorytha), and the broad-snouted caiman (Caiman latirostris). The seas around the island, which are also protected, feature a unique convergence of tropical, subtropical, and temperate-zone marine life, and may be the only waters in the world where it is possible to see corals and tropical fish including sharks along with sea turtles, Magellanic penguins and cetaceans such as southern right, humpback, Bryde's, orca, and dolphins.

The islands are contained within the 12,400 hectares (31,000 acres) Tamoios Environmental Protection Area (APA), created in 1982. The island (and APA) contains the Aventureiro Sustainable Development Reserve, created in 2014 from the former Aventureiro Marine State Park, which was integrated with the Praia do Sul Biological Reserve. 62.5% of the island is covered by the Ilha Grande State Park, making a total of 87% of the island protected.

Small-scale ecotourism is being encouraged on the island. Although it has no roads and motorised vehicles banned, the island has more than 150 km (93 mi) of hiking trails connecting all the coastal villages and hamlets. Lodgings have been made available near many of island's 100 unspoilt beaches. One of the most popular activities for visitors is to trek to Lopes Mendes beach, about a two-hour hike from Abraao. Travel companies are now offering sight-seeing trips to see the island's various beaches, mountains trails and waterfalls.

Most of the visitor facilities and the park headquarters are located at Vila do Abraão. The village may be reached from the mainland by local ferries and fast catamarans.

Here, you are the most important person. Our dedicated, caring and discreet attention will ensure your stay is perfect. Our maxim is:

The place of happy people...

Our sustaining and healthy breakfast and a delicious afternoon tea are served in the garden pavilion, which is also a great place to meet fellow guests and make new friends.

The garden has a a view of the mysterious Pico de Ferreira (760m). Our Inn is also home to many small native animals such as squirrels, little monkeys, butterflies, lizards, hummingbirds and colourful parrots.

The chalets are your very own private retreat on Ilha Grande. Built in a rustic, ecologically friendly style, they were designed to be in harmony with the vibrancy of the surrounding nature.

Relax in your airy and comfortable lounge room, where you will find and an excellent library of DVDs and magazines, together with table games such as chess, dominos, backgammon and cards.

The cozy and romantic chaléts:

Frangipani, Tibouchina, Azalea and Heliconia nestled in the lush greenery of our tropical garden, offer guests peace and privacy.

The chalets have a private balcony with hammock overlooking the green of the garden with the mountains in the distance.

The elegant double suites deluxe "Jasmine" and "Orchid" are on the upper level. Light and airy, they offer sea and coastal mountain views from the veranda.

The cozy and romantic chalet "Hibiscus", nestled in the lush greenery of our tropical garden, is cute and cozy. The "Love Shack".

The chalets have a private balcony with hammock overlooking the green of the garden with a private veranda.

The chalets have an extremely comfortable double bed made from recycled Brazilian timbers, with premium quality inner spring mattress and small but sparkling clean bathroom.

Double guest room "Begonia" and twin room "Bougainvillea" are two of the original rooms of the inn. They are cozy and comfortable, furnished with solid timber furniture, including a double bed or two single beds.

The rooms have air conditioner, a silent ceiling fan with dimmer control, LCD TV & DVD, bar fridge for your personal use and a sparkling clean bathroom with hot shower. The veranda has a table, chairs and a hammock.

Love is in the air at our Inn! Just married, or soon to be, we offer you our heartfelt congratulations on your marriage. Aratinga is the perfect place to spend your Honeymoon on Ilha Grande.

The romantic chalets nestled in our lush, tropical garden offer, peace, privacy and comfort. They have a private veranda with hammock.

Our dedicated, caring and discreet attention will ensure your stay is perfect. Our maxim is: The place of happy people.

Our Inn has a wonderful package for you. It includes:

Our Inn's Nature Spa on Ilha Grande is a truly romantic getaway. Just relax, walk in the rainforest, swim in sparkling waters and soak up the sun or enjoy lunch on the beach.

If it's your Birthday, Honeymoon, Wedding Anniversary, let us pamper you, or give the perfect present to a loved one.

Pure bliss! It's all yours for the day.

Let go & find peace. Breakfast & tea, lounge & bathroom. Explore this paradise and make our Inn your haven for the day.

Celebrate love with a romantic lunch at Lua e Mar restaurant. Enjoy delicious seafood whilst looking over the sparkling waters of the bay of Abraao.

Zen
Look after your mind, body and soul. Therapeutic or relaxing massage by masseuse in privacy of your lounge. Share a bottle of sparkling wine to end your day.
Slice of Heaven

Skim across crystalline waters, swim at Feiticeira beach. Lunch at the Coqueiro Verde in the tranquil bay of Saco do Ceú. Good food and fine wine. Truly a day in heaven.

Enjoy a day on Ilha Grande at our Inn’s Nature Spa. Many boat trips to choose from, lunch on the beach, or enjoy a therapeutic massage by professional masseuse in privacy of our guest lounge.

Come and celebrate your holidays at our Inn.

There's no doubt, whether it's time to relax, or enjoy the fun, our Inn is definitely the place to be.

All Souls' Day and Day of Commercial Traders

November is a glorious time of the year on Ilha Grande. Your stay includes a fun filled day of adventure, boat trip to Lopes Mendes beach, silver sand and great waves!

Proclamation of the Republic

Street parades and marching bands, fireworks and festivities for all to enjoy. Your stay includes a boat trip to Lopes Mendes surf beach.

Black Awareness Day on Black Beach, the perfect place to relax! Your stay includes a boat trip to Lopes Mendes beach. Take our bodyboards Vortec and catch some waves!

Happy Hour! Loads of fun and laughter, lots of bubbly, live music to dance the night away, barbecue, caipirinhas & your great company! Boat trip to Lopes Mendes beach included. What a way to bring in the New Year!

The anniversary of the city on 6th January remembers the Discovery of the Bay of Angra dos Reis in 1502. This is also the Day of Kings. Come and celebrate this special holiday long weekend. Your stay includes boat trip to Lopes Mendes.

Saint Sebastian is the patron saint of the village of Abraão so this is a very important holiday! Come and celebrate this special holiday long weekend. Your stay includes boat trip to Lopes Mendes.

This is Earth, not Heaven, but on Ilha Grande you have both! Your stay includes a boat trip to Lopes Mendes beach and a special gift from our Easter Monkey!

Autumn is definitely the best time of the year on Ilha Grande. Super long weekend holiday includes boat trip to Lopes Mendes beach. Chill out, soak up the sun, cool off in crystalline waters. It's all good!

October is one of the best months of the year. Summer is coming, the days are beautifully warm and the nights are still cool. Take advantage of this prolonged holiday weekend to explore some of our stunning beaches and forest trails.