Supreme comfort and elegance in Knysna: for sale

Supreme comfort and elegance in Knysna

Knysna; probably from a Khoisan word meaning "place of wood" or roughly "fern leaves") is a town with 85,708 inhabitants as of 2019 in the Western Cape Province of South Africa and is part of the Garden Route. It lies 34 degrees south of the equator, and is 55 kilometres east from the city of George on the N2 highway, and 33 kilometres west of the town of Plettenberg Bay on the same road.

Little is known about the indigenous inhabitants of Knysna, the Khoikhoi. The area east of present-day George was separated by high mountains and deep gorges, making it virtually inaccessible to European travellers.

The SS Agnar tows an unknown sailing ship into Knysna Harbour in 1910.

Nevertheless, the first Europeans arrived in the area in 1760, and the farm Melkhoutkraal (literally translating from Afrikaans as 'milk wood kraal’) was established on the eastern shore of the Knysna Lagoon. Stephanus Terblans, the first European farmer to settle in the area, was given a loan permit to farm here in 1770.

Upon moving to Knysna George Rex, a British-born entrepreneur credited as being the founder of Knysna, acquired the loan rights to Melkhoutkraal in 1804 and later, in 1816, to the farm Welbedacht, which he renamed Eastford. He gave 80 acres (32 ha) of Eastford to the Colonial Government, on which the Royal Navy established the township of Melville. Rex’s properties were sold when he died in 1839.

In April 1817, the transport brig Emu, belonging to the Cape Town Dockyard, was the first European vessel to enter the Knysna heads. She struck a rock, now known as Emu Rock, and was holed. Her crew ran Emu ashore to prevent her sinking. In late April HMS Podagus arrived to render assistance. After surveying the area, Podargus sailed safely into the Knysna and retrieved Emu's cargo.

The next major settler in Knysna was Captain Thomas Henry Duthie, who married Caroline, George Rex’s daughter, and bought a portion of the Uitzigt farm from his father-in-law which Rex had named Belvidere. The construction of a small Norman-style church was commissioned by Duthie on his property, and was consecrated in 1855. The settlement’s population grew slowly, and Englishmen such as Henry Barrington and Lt. Col. John Sutherland, who established the settlement of Newhaven on a portion of purchased land, settled in the area. At the time, Knysna was a field cornetcy of Plettenberg Bay within the Magisterial Division of George. In 1858, Knysna became a separate Magisterial Division, new stores and accommodation facilities were opened, and Knysna became the new commercial centre of the region.

On their way to New Zealand, the Thesen family who were travelling from Norway fancied the little hamlet of Knysna so much that they decided to stay, bringing with them their knowledge of commerce and sailing. Soon, timber was being exported to the Cape from the vast areas of forest surrounding Knysna, and a steam sawmill and small shipyard were established. Later, these were relocated to Paarden Island, later known as Thesen's Island. 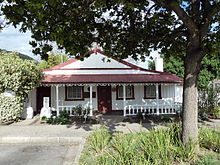 In 1878, an important discovery was made in the area. A gold nugget was found in the Karatara River, near Ruigtevlei. Soon fortune hunters from all over the world arrived at the Millwood Forest in search of gold, and Millwood grew into a bustling town. Millwood was declared a goldfield, the first in South Africa. However, soon not enough gold was being recovered to sustain a growing town, and the mining industry in the area collapsed. Some miners relocated to Knysna, bringing their little homes with them. One of the houses, known as 'Millwood House', now functions as a museum.

By 1880 over 1000 people had settled in Knysna. In 1882, the settlements of Newhaven, Melville and the "wedge" of land between the two villages were amalgamated to form the municipality of 'The Knysna', named after the Knysna River.

Knysna's timber industry peaked when George Parkes arrived from Britain and saw the opportunity to use the hardwoods of the Knysna Forest for export to elsewhere in the country, and even overseas. He established the Knysna Forest Company, later renamed Geo. Parkes and Sons Ltd., which is still trading to this day.

On June 7, 2017, fueled by strong winds from a severe storm - the Cape Storm of 2017 - coming in from the west, a fire swept through the town and surrounding areas. Killing 9 as a direct result of the fires and another 2 indirectly and displacing around 10,000 people from all walks of life. One Forensic Investigator believes the fire was caused by arson. 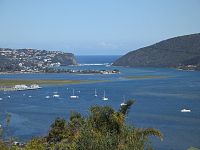 The town is primarily built on the northern shore of a large warm-water estuary, known as the Knysna Lagoon, which is fed by the Knysna River. The estuary opens to the ocean after passing between two large headlands. These are popularly known as "The Heads", and have become infamous due to the loss of boats and fishermen passing through their treacherous and unpredictable waters. The Paquita, a German vessel, sank on the eastern side of the Knysna Heads in 1903. Near them are geological formations, known locally as "The Map Stones." To the north of Knysna, Afro-Montane or temperate rainforest covers the hilly terrain for 20 km until changing to fynbos or macchia high in the Outeniqua Mountains. The eastern head is heavily developed, while the western head is a private nature reserve, formerly owned by teacher and television presenter William Smith. which he inherited from his father, famed ichthyologist J.L.B. Smith. 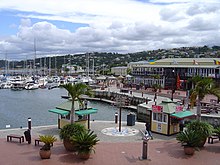 The town is a popular destination for both tourists and senior citizens entering retirement, especially among the British and former expatriates due to the year-round warm climate. Recently, the town has also become a preferred destination among golfers, as the town boasts several world-class golf courses, including Pezula Golf Course, Simola Golf Course and the well established Knysna Golf Course situated on the lagoon. It is near the towns of Plettenberg Bay and George, where there are airports. Knysna is also home to Mitchell's Brewery although the company no longer brews beers in the town. The forest, rivers, estuary, and ocean surrounding the town are dotted with hiking trails and plenty of opportunities for outdoor activities. Hikers, runners, kayakers, swimmers, and fishermen are known to be particularly fond of Knysna.

Knysna hosts a variety of annual events, which draw local and international visitors alike. Such events include the Knysna Oyster Festival in late June and/or early July; the Pink Loerie Mardi Gras at the end of April and/or beginning of May; the Knysna Speed Festival takes place in the first week of May, the highlight of the week being the Simola Hillclimb, currently sponsored by Jaguar South Africa. The Rastafarian Earth Festival takes place at the end of July, celebrating Rastafarian religion, culture and lifestyle.

In a lagoon-side setting as beautiful as ours, we had to make sure that the inside was every bit as beautiful as the outside and our guests tell us we've done exactly that! Supreme comfort and elegance are our watchwords. Designer-tiles, craftsman-made yellowwood and blackwood furniture and fittings and truly exquisite bathrooms combined with our dedicated service to make your holiday a real delight.

One of the most important parts of a real holiday is the breakfast that starts your day at our Guest House, you'll find it's a sheer joy, either in our tastefully decorated dining room or, as many guests prefer, on our huge balcony with its stunning views to Knysna Heads and the ocean beyond.

Each Luxurious bedroom has a TV set for watching in the comfort of your own privacy, tea and coffee facilities and enormous cupboard space so that you don't have to live out of a suitcase.

Our brand new tiled bathrooms are elegance itself, and the perfect setting for you to relax your tensions away.

To complement the comfort of our bedrooms, there are attractive lounges, all with the same lovely view, where you can relax with a good book, a quiet drink or your favourite TV show. Our Guest House gives you room to spread yourself out, with a huge private garden where you can soak up the sun.

At the Guest House, all rooms are fitted with a wardrobe, a TV and a private bathroom.

A Full English/Irish breakfast is available every morning at our Guest House.

Featherbed Boat Cruises is less than 1 km from the accommodation, while Knysna Waterfront is 2.1 km from the property. The nearest airport is Plettenberg Bay Airport, 35 km from our Guest House.